{"subsource":"done_button","uid":"745614E9-3C0E-46E0-B072-8A09263BCC81_1615539168008","source":"other","origin":"unknown","source_sid":"745614E9-3C0E-46E0-B072-8A09263BCC81_1615539188222"}
Three different types of food. Three renowned directors. Three Bollywood stars. If that is already not thrilling enough, then wait for “Three Course Meal”. An upcoming anthology being cooked by KEFI Media & Entertainment. We already know that the directors – Indrasis Acharya, Shieladitya Moulik and Arjunn Dutta have been masters in their own craft. They have a very different tone in their individual story telling, but this time they have come together to push the envelope a little further. All three stories are around one central theme – Food. And the genre is Dark fantasy thriller. Yes, and that too from the directors who brought to you mesmerizing realistic dramas. So fasten your seatbelt and get ready for a ride into the culinary adventure called – “Three Course Meal”.
Indrasis Acharya said “I am really excited to work in this project not for the reason that it is my first work in National platform but also for the subject and form that I was longing to work . It’s completely different in all aspects than my all earlier works and bit nervous as well. Privileged to embark in this ambitious journey on food and darkness for national audiences. It will be another exciting journey working with two of my fellow contemporary talented directors. Thanks to my producers for having trust on me. Hope will deliver something to replenish your cinematic thirst.”
Shieladitya Moulik said “Every person has a hidden dark side. We artists do too. Probably my story in ‘Three Course Meal’ is the darkest that I could ever conceptualize. It felt really heavy after writing the screenplay and I heard the same when I narrated it to the producers and my team. But it’s really challenging to do something in this genre. I’m planning to surprise the audience not only with the content but also with the execution. I am also very thankful to KEFI for supporting me with a crazy idea like this and I’m super excited to collaborate with ace directors like Arjunn and Indrasis da on this one.”
Arjunn Dutta said, “Three course meal is definitely one of a kind. Nationally, I will be doing something experimental for the very first time. Food and dark combined together is surely a novelty, I am really excited and nervous at the same time. Can’t thank enough to KEFI for supporting such an unconventional idea. Also it would be great fun collaborating with Indrasis da and Shieladitya da. My track is a layered one with an unusual twist at the end.” 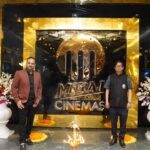